After working the whole season in Portugal it was time for a vacation. So we decided to do a Surf Road Trip with our Citroen Berlingo from Portugal to Morocco. 3 weeks of great waves, delicious Tagine and friendly & happy people.

There are 3 different options to cross from Spain to Morocco by ferry:

A few days before we wanted to go to Morocco we checked the prices (2 persons + 1 car) of the 3 Ferries (FRS, Trasmediterranea, Balearia) online but we were hoping to get a better price directly at the ferry terminal. The prices at the terminal were exactly the price that we found online. So we decided to go from Algeciras to Ceuta as it saved us about 100€ and Ceuta is only about 30km from Tanger Med. In Ceuta you will also find good mechanics, cheaper petrol stations, Decathlon and a Lidl.

The highway/Autobahn is pretty new and allows you to go up to 120km/h. There are plenty of petrol stations with restaurants, ATM’s, water & sometimes wifi along the highway.

Here is an overview of the fees that we payed:

The petrol is super cheap in Morocco but it’s suppose to be not as good as the petrol that we have in Europe. Someone told us to only put petrol at the gas stations on the highway as their petrol is suppose tob e better. Here is an overview about the petrol price from Portugal, Spain & Morocco (October 2017):

Mehdia is a small beach town close to Kenitra. More and more new buildings are built but there are still not too many international tourists yet. The town itself is very quite but the atmosphere is somewhat weird. We felt very save but we’ve heard that a few VanLifers were robbed close to Mehdia.

The only thing that bothered us a lot were the parking guys that charge you 5 DHM whenever you want to park somewhere. If you change your parking spot you will have to pay again 5 DHM, eventhough it’s only around the corner.

1. Moone Bay is a nice right hander that works best at mid tide. You will find it on the right side oft he beach right next to the peer.

2. The River Wave is Morocco’s best left hander and still a secret spot as there are not a lot of tourists in Mehdia. This wave needs some swell to work but when it works it’s just perfect.

When we got to Mehdia we went to the Mehdia Surf Camp to talk to the guys there to get some more information about the surf spots and the area.

There are plenty of restaurants across the street at beach. They all serve pretty much the same food such as Fish, Chicken, Tagine, Salads and Sandwiches. Prices vary between 70 DHM for a plate with 4 different types of fish, 60 DHM/25 DHM for a Tajine chicken/vegetarian and 15 DHM for a Sandwich.

Usually we find good spots on the iOverlander App to spend the night but it looks like not too many overlanders came to Mehdia.

There is a big Campground in town but it was closed when we were there. So we decided to just park on the side of the road somewhere in the residential area. We had a good & quite night there and even more important it was free. 😉

The Mehdia Surf Camp also offers accomodation & food, it’s a really nice place if you’re looking for surf buddies and if you don’t want to sleep in the car.

Lots of people told us we have to go to Essaouira because it’s a really nice town with good surf and good vibes. When we got there we were a little bit dissappointed because it was super touristy, new fancy buildings everywhere, camel riding at the beach, unfriendly parking guys that charge you 10 DHM for the parking and an additional 20 DHM if you want to park overnight.

There are a few different beach breaks along the beach but when we were there most of them were closing out. When there is wind it’s suppose to be a really great spot for kite surfing.

Medina (the old town of Essaouira) is the place to be when it comes to food & shopping. It’s a real Morrocan market with lots of restaurants and all kinds of souveniers. And everything quite cheap. Falafel is about 20 DHM and a Kebab 25 DHM.

I was in Imsouane 7 years ago and it made me happy to see that it has only changed a little bit. Now there are more restaurants, surf shops and new houses but it still has good vibes. We’ve been to a lot of places but we really fell in love with Imsouane and the friendly & happy people here.

The Bay is a real wave machine. It creates one perfect wave after the other. It’s just mind blowing! It’s a right hander point break that works best around low tide and is flat like a lake at high tide.

Lots of people say that it’s super crowed, and yes that’s true, especially when there are no waves in Taghazout and all the surf schools come over to surf in Imsouane. But there are sooo many waves that there are enough waves for everyone. Trust me, after 1 hr you will be so tired because you surfed so many waves. 😉

If you want to be the only one in the line up, just check the Bay when the tide gets low to you catch the first wave that’s breaking after high tide. For the first 15-30mins you will be alone or only with a handful of people.

Cathedral Point works almost all day long but it worked best around high tide. Here the waves get a little bit bigger and faster as in the Bay.

There are plenty of restaurants in Imssouane. Most of them serve fish, seafood and Tajine. You will find the best Pizza in town at “Les 3 S“ and we really loved the Tagine and the Fish/Seafood at the restaurant right next to (left of) “Les 3 S“.

For Breakfast check out one of the restaurants “Wave“ at the beach on the otherside of the Bay, they have good and cheap breakfast deals.

If you want to prepare your own meal, check out the local fish market at the harbour and buy fresh fish & seafood directly from the fishermen.

There are lots of accomodation options in Imsouane: Surfcamps, Hostels, Hotels and AirBnB. The Auberge Kahina is really nice botique hostel with a beautiful view of The Bay. If you are after a surfcamp, I recommend Travel Surf Morocco, Sandycamps and Olo Surf Nature.

We slept in our Berlingo and just parked it on the side of the road. It was save and quite. But fellow VanLifers got threatened by the parking guy. He forced them to pay 10MAD for every night the spend in Imsouane otherwise he will smash their windows. They parked on the side of the road which is supposed to be free and the parking guy only tried to get money from them and no one else (maybe because they speak french?!). Luckily nothing happened but just be aware.

The first time I was there was in 2010. We rented a car at the airport, drove along the coast to check out all the surf spots in and around taghazout and stayed in an appartment of a local for 5€/night. Well, times have changed in Taghazout. Lots of Surfcamps, Restaurants, Coffee Shops and plenty of new houses and hotels and resorts.

The surf spots are still great but you can hardly see them as there are Resorts and Hotels now where you used to park on top oft he cliffs to check the waves.

If you like it fancy and love to meet lots of people, this is the place to be. But if you prefer it more quite and authentic you probably won’t like it here.

After a week in Imsouane we decided to continue our Surf Road Trip south. So we checked out Mirleft, Legzira and Sidi Ifni. Unfortunately we were not very lucky with the waves and somehow the places felt weird..like ghost towns…so we decided to go back to Imsoune and spend the rest of the trip there. 😉

If you need more information about this area, check out Ifni Surf, they do surf trips and also offer accommodation.

🙂 watch out where you drink your tea as lots of restaurants use tap water for the tea.

🙂 if you need internet buy (supermarket or kiosk) an IAM (Moroc Telecom) Prepaid SIM card, it will give you 1GB for every 10 DHM. And it works really well and fast.

🙂 always have a few coins handy to pay the parking guys

🙂 if you love to enjoy an after surf beer make sure to stock up on beer at the bigger supermarkets in Agadir as hardly any restaurant is selling alcohol.

🙂 if you are only after a softboard you could buy one at Decathlon in Agadir and donate it to a local kid at then end of your trip. 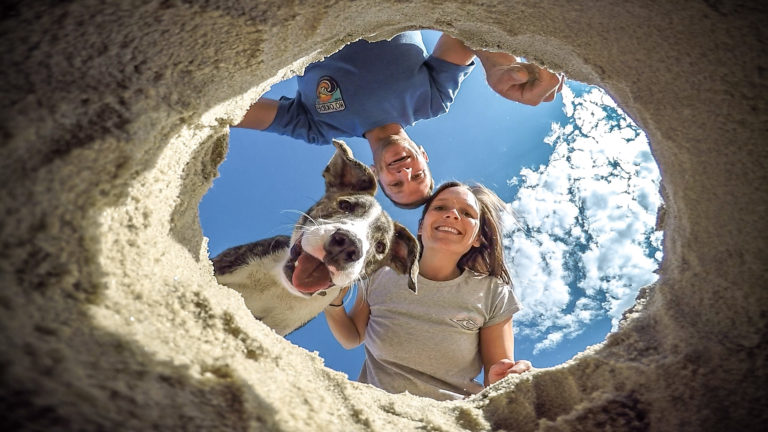 We’re Fede, Tini & Buddy, a happy and adventurous couple from Germany & Argentina & a dog from Australia, who love to surf and explore the world. After traveling the world for 4 years – living in a van & surfing everyday - we found our home and happy place in Australia.

We write about our Travel, Surf & VanLife adventures around the world to share our experiences & inspire other people because #lifeisbetterwhenyoutravel

Our next adventure: Byron Bay